Read on for a write-up by Laura Carter, WOKE community organizer and a PhD student at Keele whose research focuses on narratives of motherhood in the context of contemporary migration; the lived experiences of migrant mothers situated in dispersal areas around the UK, with a focus on Stoke-on-Trent. 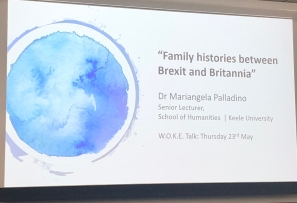 On the 23rd May 2019, Women of Keele Educate held an event that was both a celebration of what W.O.K.E had achieved during its first year, and a chance to hear from one of our supporters; Dr Mariangela Palladino.

On a personal note:  Mariangela a has been a constant presence in my time at Keele University, and for the past few years she has been my dissertation supervisor at both undergrad and masters levels and is now my PhD supervisor.

She has helped to shape and focus my academic ideas and has been a pillar of support within many aspects of my life. As well as all of this, Mariangela has been a friend. When I heard that she was going to be speaking at the final W.O.K.E event of the year, I jumped at the chance to cover it. 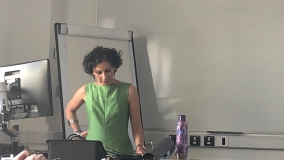 Mariangela is a senior lecturer in Postcolonial studies, the deputy programme director for English and the AHRC NWCDTP Pathway lead for literature.

Her biography, research interests, and publications can be found here.

When thinking about her identities, Mariangela introduces herself as a woman, European, Italian and Mediterranean.

Born in southern Italy and she describes herself as a late product of the South/North diaspora in Italy. Antonio Gramsci explains this to be ‘the southern question; the social stratification and state formation that defines the relationship between northern and southern Italy’ (Palladino).

Since the Italian unification in 1861, the people of the north of Italy have prospered exponentially at the expense of their southern counterparts.

Because of this Italian north/south divide, the south of Italy has been characterised by social, cultural and economic subalternity, confined to this state because of its geographical closeness to the Maghreb (Northern Africa).

Mariangela explains that ‘the south is considered as a place of otherness deeply implicated in the fluid alternative of the Mediterranean and its history’ (2019)*.

This saw a period of migration of Italian peoples from the south to the north of Italy, where the prospects were much better.

Mariangela explains that in her lifetime this north/south divide has continued further and does not only encompass the inner regions of Italy, but also includes the entirety of Europe.

In order to continue her academic studies at a doctoral level, Mariangela had to look further afield than the confines of Italy and this brought her to the University of Strathclyde, Glasgow in 2003.

It is here where Mariangela made her home, or as she explains ‘Glasgow made my home for me’ (2019)*.

Mariangela explains that her identity grew during the time she spent in Glasgow: ‘a woman, an Italian, a Mediterranean, a foreigner in Britain, a new Scot, a Glaswegian, and a scholar’.

She embraced this new identity that she began to form in the country that she calls home. 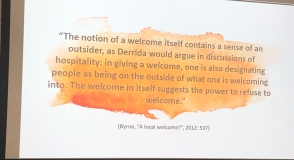 Around the time of Brexit, the Vice-Chancellor sent out an email to all members of the university stating that peoples’

‘immigration status has not changed as a result of the vote. This will remain the case until the government decides otherwise’ (2016).

But this reassurance from the university did little to assuage the fears that were connected to the new social atmosphere surrounding Brexit.

‘Conditional laws would cease to be laws of hospitality if they were not guided, given inspiration, given aspiration, required, even, by the law of unconditional hospitality’ (Derrida).

Mariangela explains that Derrida’s explanations of conditional hospitality are what Brexit has ‘insidiously’ placed within her relationships with the country she now calls home (Palladino, 2019)*.

Following this, for Mariangela, there were several incidents where her identity was questioned.

‘They had already decided that I wasn’t only a guest at the hotel, my positionality of guest was extended to me as an individual both inside and outside the hotel’ (Palladino, 2019)*.

It was clear that Brexit now inferred a hierarchical scale of whiteness which in turn forced Mariangela to seek legal advice and begin the application process for naturalization.

She now felt the need to obtain a permanent residency within the UK to secure her rights, and the rights of her family.

Mariangela is acutely aware that her positionality somewhat affords her the privilege of choice, and the means to apply for naturalisation.

Many others who have been affected by Brexit simply do not have this choice.

She explained to the room the hoops she had to jump through whilst going through this process of naturalisation.

She was required obtain permanent residence, pass the life in the UK test and finally apply for citizenship.

In order to prove permanent residence, Mariangela had to go back through 15 years of paperwork, 15 years of her life that had to be proved and documented in order to secure her rights.

This is something that she found immensely difficult, trying to find proof of residency of shared student accommodation where contracts or utility bills were not always saved was a monumental effort, but an effort that needed to be completed as part of this process of naturalisation.

Eventually Mariangela was able to prove her residency with letters from the GP – the results of a gastroscopic procedure were the only proof she had.

‘I was literally opening myself up, handing private self to the state’ (Palladino, 2019)*. 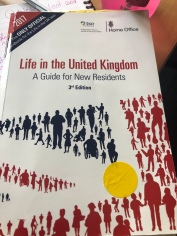 Mariangela handed around a copy of the book she used to help her prepare for the ‘life in the UK’ test.

Every question it contains is a glorification of supposed British values, and certain histories and firm ideas of a shared culture.

This includes a section discussing the British Empire, which merely shows how ‘wonderful’ Britain was during this time, conveniently forgetting the atrocities that were committed in obtaining this vast empire.

Mariangela went on to explain the compulsory citizenship ceremony she was invited to attend as an ‘achievement’ of her naturalisation.

The whole event was a display of imperial nostalgia; she recalls that the entrance hall to the building (Stafford County Hall)  was paneled with Burmese Teak.

The ceremony was officiated by the Vice Lord-Lieutenant of Staffordshire wearing military regalia.

The portrait of the Queen and a Union Flag was displayed in a room (The White Room) and it was divided into two sections – the religious and the Godless sides.

Rule Britannia was played in the background as the participants waited for the ceremony to start. 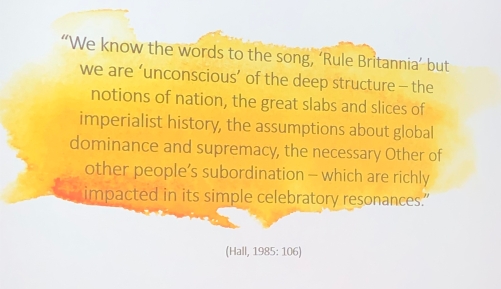 For those unfamiliar with the lyrics of Rule Britannia, I have included a link to them here. With the most notable line of this song/poem being:

‘Britons never, ever, ever shall be slaves’

Mariangela recalls sitting there, in the midst of this imperial nostalgia, becoming a reluctant new citizen and feeling as though this whole process of naturalisation was painfully striking at her very core, enough to cause her to feel physically sick.

‘This ritualization of citizenship was a full on display of British pride dangerously entangled with a fantasy of empire’ (Palladino, 2019)*. 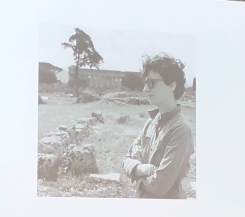 Mariangela explained that, during the second World War, her Grandfather was captured and imprisoned by British troops in Libya; Prisoner of War (POW) number 16715.

He was interred in Egyptian and South African concentration camps until 1944 where he was transferred to the Lodgemore Camp in Sheffield, England.

Exploring these events in preparation of this paper, Mariangela accessed the website for the museum of the Zonderwater concentration camp in South Africa.

Astonishingly, whilst looking through the photographs of unidentified POWs Mariangela came across a picture of her nonno (grandfather).

From this photograph she was able to contact the Zonderwater museum and confirm details of her nonno’s life within the concentration camp.

Her grandfather returned home from the war and Mariangela remembers fondly speaking to him about studying in the UK and how pleased he was to hear this news.

These memories still do little to ease her feelings of uneasiness regarding the naturalisation process she has now been forced to undertake.

She was constantly reminded that her citizenship was conditional, Mariangela was now able to contribute to society, failing to recognise the contribution that each member of this ceremony had already made to this country.

This process high-lighted that citizenship was seen as something that has to be earned by being ‘good immigrants’ and ‘good citizens’, rather than a legally granted right.

And still, this naturalisation process continues to uphold a divide, one between ‘new’ citizens and already established citizens.

As a new citizen, you must be a ‘good citizen’, you must contribute to society, your hospitality is conditional.

‘The act of being accepted, welcomed, taken in, implies the possibility of rejection, of expulsion, of revoking’ (Palladino, 2019)*.

Mariangela explains that even as a new-citizen, having completed this naturalisation process, she still feels a disquiet about her identity.

She explains that her positionality of having two passports clearly exhibits a split, the cross-over from being alien to being ‘one of us’, political upheavals, changes to global markets, and migration.

‘Brexit has stirred a disquiet in my relationship with this country’ (Palladino, 2019).

Mariangela’s newly acquired citizenship – accompanied not only by the compulsory citizenship ceremony, but also by a medal – has been bestowed upon her. 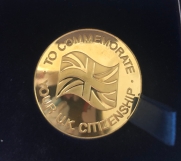 Not as a right, but as a reward for her ability to act as the perfect ‘good citizen’.

This reward has forced Mariangela to retreat further into an exploration of her family history, to find some kind of shelter from her own thoughts and feelings that Brexit and naturalisation have produced.

*All direct quotations of Mariangela Palladino have been taken from personal notes that were written during this W.O.K.E event.