A Year After: White Tears Are Racist

Reflections on the workshop that got us retweeted by the far right, death threats and helped white allies on campus engage with the ideas of white fragility.

On the 23rd November 2018, we had an external workshop facilitator come in and do a workshop called ‘White Tears are Racist’; based on the work of academics who want white feminists to examine how they silence Black and people of Colour, and particularly – Black and women of Colour. 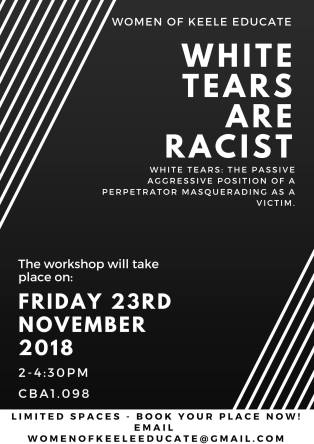 We were very excited to be running this workshop. As seasoned intersectional feminists who do anti-racism work – we knew the benefits this workshop could offer.

We soon found out that running this workshop would also incite white hot rage, mostly from Americans, but a few not-so-clever Keele alumni also joined in the hate mail barrage that we got.

We were amused by the fact that, ‘anonymous’ alumni used their named or work emails to send us hate emails.

A far right personality retweeted our event, which we think led to the increasing number of death threats we received.

We were very lucky to be supported by the Keele Comms team who checked that we felt safe and knew how to keep safe.

We didn’t reply to any of the hate messages or emails.

People did also try and attack our next speaker on twitter as well; and this was horrendous for the staff member who was due to speak for us.

Unsurprisingly – internet hatred, and a few humans at Keele complained that, they felt attacked as white people.

Pushing this aside, we persisted and ran the workshop.

The workshop began in a circle, everyone was given a chance to introduce themselves by name, pronoun and say a word on how they were feeling.

The group then created a shared agreement for the space, which was developed from the WOKE safe spaces rules and then developed for the session specifically.

Be aware of how much space you are taking up

The facilitator raised the point for the white people in this workshop, that they would feel uncomfortable at certain moments – but instead of remaining uncomfortable, they should reflect and be aware of the benefits of leaning into discomfort and learning from it.

The facilitator also told the room that, it is not the responsibility of Black and people of Colour to educate people on racism – but for people to proactively work on themselves and call each other out to create changes.

The workshop then did an active listening activity, where the attendees worked in pairs and worked on their listening skills. Each person would talk about their hopes and fears for the workshop.

Fully warmed up the workshop, the facilitator then asked the pairs to discuss what they understood by the term white supremacy.

The attendees worked in groups of four, in order to further develop their understanding before looking at a definition of white supremacy:

“White supremacy is a historically based, institutionally perpetuated system of exploitation and oppression of continents, nations, and peoples of color by White peoples and nations of the European continent, for the purpose of maintaining and defending a system of wealth, power, privilege.

It is a system, a web of interlocking, reinforcing institutions: political, economic, social, cultural, legal, military, educational, all our institutions. As a system, racism affects every aspect of life in a country.”

Following on from the discussions on white supremacy, the group then split into pairs and then fours in order to explore their understanding of the term ‘white fragility’.

After some work, the group returned to a circle to discuss a definition and whether the concept resonated with themselves:

White Fragility is a state in which even a minimum amount of racial stress becomes intolerable, triggering a range of defensive moves.

These moves include the outward display of emotions such as anger, fear, and guilt, and behaviors such as argumentation, silence, and leaving the stress-inducing situation.

These behaviors, in turn, function to reinstate white racial equilibrium.

Following on from these discussions, the room then moved to the idea of the ‘Good/Bad’ binary.

This explored the issue that, racists were ‘Bad’ people and so this left people who saw themselves as progressives as, ‘Good’ people, who were incapable of racism.

Yet this idea absolves a lot of people of doing anti-racism work, and often allows white progressives to silence Black and people of Colour – whilst not reflecting on their own behaviours which contribute to racist systems.

The workshop challenged the idea that racists, are terrible people ‘out there’ [and therefore not me]; rather than understanding that we have been raised in a racist society.

The workshop facilitator then showed that once you challenge this idea – you will realise that you are a part of this structural racism.

The group then explored what it felt like to be called out; how they had dealt with being told they had said or done something racist, whereas the Black and people of Colour in the room discussed how it has felt to deal with white fragility.

White fragility was seen in the way that rather than saying “thank you for pointing this out to me” – people get defensive, angry, deny what they have done or had said.

For example: it brings the focus back to white comfort, rather than the actual impact of the racist thing said or done – even if this isn’t the conscious intended outcome.

This can also be seen when, the reality of racism for Black and people of Colour is denied: ‘are you sure they weren’t just having a bad day’; ‘they didn’t mean it like that’; ‘you’re being overly sensitive’; ‘you’re over-reacting’.

The facilitator suggested a way to tackle this: white people should talk to other white people about their own feelings of white fragility, so that they actively do the emotional labour and not expect Black and people of Colour to comfort you.

This needs to be done with some self-awareness – so that the person you talk to doesn’t minimise what you have said or done to make you feel better and deny the impact of white fragility.

The group then moved on to discuss what ‘White Tears’ meant.

Discussing the below quotes:

“’White tears’ is the passive aggressive position of a perpetrator masquerading as a victim.” – Beth Collier

‘Sometimes, when we defend ourselves, white women look at us with the utmost fragility. They claim access to emotions such as fear and pain without missing a beat, like they were born to do it, before we can even dare to consider that we may be frightened or hurt, too. Their eyes rattle in their sockets, saying, “Why do you punish me for having such a big heart?”’

Finally the group discussed: Whiteness, Niceness and Anger – who gets to be nice? Who defines what nice is?

The group then had points to take away and reflect upon, to see how they would work with their own white fragility next time and to hopefully become more active in anti-racism work.

The group was then closed with some reflection on how the workshop had made them feel.

For obvious reasons pictures were not taken at this workshop however please see below for some of the post workshop feedback:

If you are interested in having this workshop or something similar run again please do get in contact with us.

We would absolutely recommend it as an introduction to some white allyship and anti-racism work.

We also recommend you look at our reading resources here:

Read past blogs, listen to the work that the Cultural Affairs Project does.

Read some sources on white fragility:

Check out the work of Rachel Cargle here