Review: Amy Vreeke: The Year My Vagina Tried to Kill Me

In total seven women from Keele went to see the fantastic Amy Vreeke’s show. Two at Friday’s show and five of us on the Saturday.

It was bloody fantastic (pun intended)

The one-woman show by stand-up comedian and theatre maker Amy Vreeke was absolutely brilliant and had the audience roaring with laughter.

Punctuating great parts of comedy where Amy relived failed one-night stands, pants ruined, and calculated that she spent £7,500 extra on maintaining her vulva instead of a second hand Volvo she could have had for the same price,  the show also had more serious, emotive parts exploring misdiagnosis, painful sex, the person she was as she tried to handle it all. 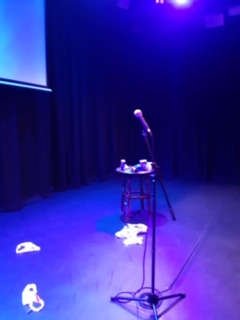 She was diagnosed with endometriosis in 2016 but it took 10 years of her presenting with many symptoms to many different medical professionals.

It took judgemental looks and suggestions that her lifestyle choices were less than ideal.

It took her concerns being ignored and her voice being silenced.

This show is a must see, follow her career, she is a talented lady.

Go and understand more about a disease that affects 1 in 10 women in the U.K. and do it in a way that has the entire audience laughing and learning together. 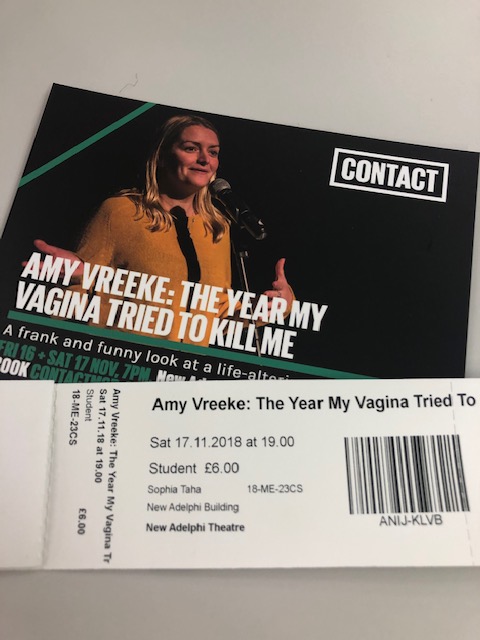 Read on for some reviews by a few of the women of Keele who also went.

Phuong Thanh Bui: I have never had a chance to watch such an amazing show ‘The year my vagina tried to kill me’ by a talented actress Amy Vreeke.

This show was the combination of art, comedy, gender equality and women hygiene, and it was highly inspiring for me.

The idea to normalize the natural behaviour of women that society cannot talk about that easily while it is part of women nature and it is beneficial for women was highly appreciated for me and I think this show was a good introduction to make this goal a reality.

Sarah Briggs: Amy’s show explored the frustrations and misinformation around endometriosis with a refreshing frankness laced with skeptical humour that was effective at highlighting that sufferers are not alone, whilst raising the crucial and unacceptable truth that more conversations around chronic health conditions are needed to combat the misinformation that is so prevalent.

Amy’s wit and energy certainly achieved her objective to make a difference to people, whether as women affected by endometriosis or as friends, partners, or relatives in a way that a bathbomb and chocolate just can’t.